It seems like Greek helmets have started circulating more widely in the militaria market, and since many of these have seen postwar service, and thus have been refurbished, they may cause problems to both Greek and British/Commonwealth WW2 militaria collectors. The subject of Greek postwar liners has been brought up several times in various fora, but I thought of putting together an article on that, including some period photos.
The first helmets used by the Greek army were British MkIs and French M15 Adrians, during WW1. These were also used during the Asia Minor campaign and as late as WW2, issued to second line and some artillery and cavalry units. It also looks like they were issued to reservists who were called to arms on October 28, 1940 and onwards, when the M34/39s were not available in sufficient numbers for the full strength of each unit.
The most widely accepted theory among collectors on the origins of the Greek M34/39 helmets is the one which circulated in some military history magazines of the past two decades, according to which, unwanted stocks of Italian M34 helmets were bought by the Metaxas Government, since they were rejected by the Regio Esercito in favour of the more robust M33. The M34/39s were being delivered unpainted, without liners and chinstraps. The manufacturing process was completed locally. Nevertheless, since the deal on these was broken after the declaration of war on October 28, 1940, not all of the ordered helmets were delivered.

Archival material, though, which surfaced during the past few years, shows that the truth must be different. The published proceedings of the 1936 - 1940 Supreme Council of National Defense (K. Vlassis, "Οι Εξοπλισμοί της Ελλάδος 1936 - 1940, Doureios Ippos, Athens, 2013) make mention of the related competition between six Greek, German and Czech companies, unfortunately without stating the suggested helmet types or any possible prototype designs. However, it is clearly stated that after eleven months of repeated competitions and trials, the winner was a relatively small Greek industrial unit, based on the island of Kea, the "Greek Enamel and Metalworks Industry" of Ath. Konstas (Record No. 20, 14/12/1936, pages 104 - 107).

Two further interesting points are mentioned in the document. Among the winning company's terms is their request for the import of Swedish steel, and the evaluation commitee's report, stating that the aforementioned company can indeed handle the production of a helmet as a whole. With a contract of 250.000 units to be handed over to the Army General Depot of Pereaus in a timeframe of ten months, and an estimated monthly production of 50.000 units, it looks like the plan had been covered.

A later contract for 3.665 helmets for Royal Air Force ground personnel was accepted on 13/6/1940 (Record No. 67, page 440). Again, the contract is for complete helmets, with a possible import of steel from the US. No mention of possible delays is made between the two documents, something that is further suggesting that the initial order had been fully delivered. So, it seems that the Greek M34/39s (a designation actually given by collectors, not contemporary sources) were Greek copies of the Italian M34s and that their production was a complete, and not partial, work of the Kea stationed industrial unit. The company's archives have fortunately been saved and a closer examination of these would possibly reveal many interesting details of the helmets' production.

The reason for the insufficient numbers of M34/39 helmets should then be attributed to the size of the Greek Army after the draft of October 28, 1940 and the blaze in the Peraeus depot in August 1940 and not to a broken deal between Italy and Greece after the outbreak of the conflict between them.


​
Wartime helmets have a leather liner, secured in place by four rivets and stamped with "Ellinikos Stratos" (Greek Army) around a cross and the liner's size, with a superimposed crown. The shell's size is also stamped on the rear. 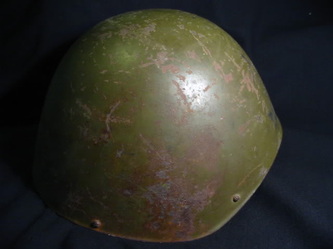 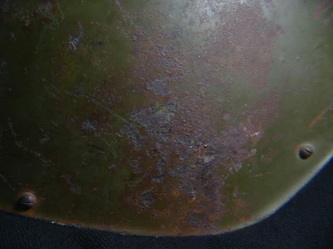 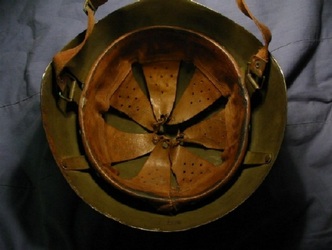 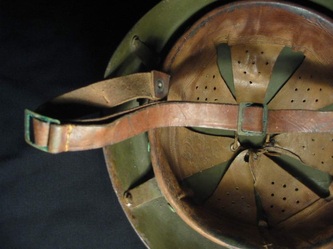 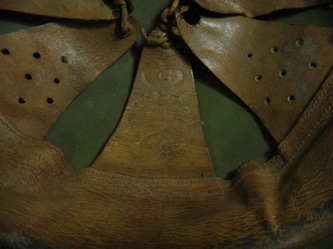 After the collapse of the front in April 1941, many of these were hidden by retreating soldiers, among other equipment, weapons etc. Some of the helmets used by Resistance came from these hidden supplies, "straight" from the Greek Army. The Italians also captured many of these, putting them to use and it is possible that they might have again changed hands during fights or the Italian Surrender of 1943. The Gendarmerie, as well as the Security Battalions, were also using this type and were another "supplier" for the forces of ELAS.
Greek forces in exile (Middle East, Italy) were equipped by the British and thus with MkII helmets.
After the end of the war, the British equipped the reinstituted Greek armed forces, with the ML transporting tons of equipment as aid. The "new" helmet adopted by the Greek army was again the MkII, of both British and South African manufacture. Contemporary photos show the use of the "original" British/Commonwealth issue MkII and MkIII elasticated chinstraps, so these were hurried into use without any refurbishing or maybe just the replacement of their old liners with "fresh" ones. The latter is just a guess, based on the observation that many early/mid war dated MkIIs found in Greece, have 1945 dated liners, made by CCL (Charles Collett Ltd., London). Period photos and veterans' interviews confirm that the helmets were painted either green or sand / tan, matching the terrain of the area of operations. 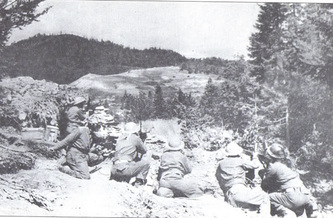 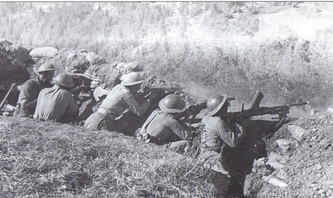 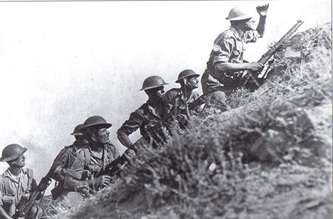 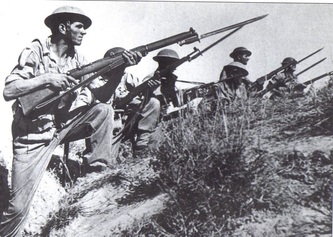 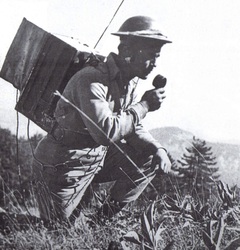 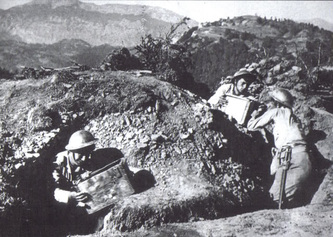 Period photos also show that M34/39 helmets were still in use during the Civil War, by both artillery and second line units, such as the National Guard Battalions. They were still in service during the mid-'50s. (Link to the source on the photo.) 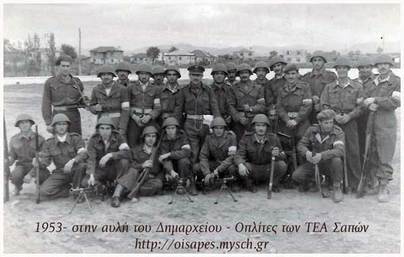 The postwar refurbishment of both M34/39 and MkII helmets took place during the early '50s, with 1953 being the most probable date, in an effort to standardize the appearance of the soldiers, parallel to equipping them with the locally made Battledress and Pattern '37 webbing "clones". They were stripped, repainted and added a high quality British-like liner, made of a brown synthetic material, an aluminium headband and a single buckle leather chinstrap. 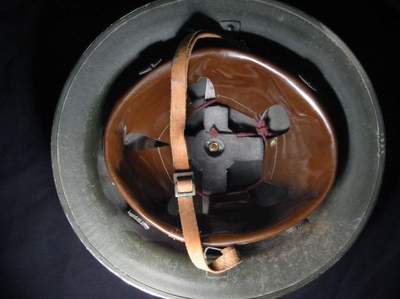 The refurbishment of the M34/39s demanded more radical changes. A hole had to be opened to the crown, so that the British-style liner would be held in place, and thus leaving the four holes for the previous liner suspension system exposed.
After the introduction of the M1 clones in the military in the mid '60s, the refurbished M34/39s and MkIIs were still being used by Gendarmerie and Police forces till the '70s. 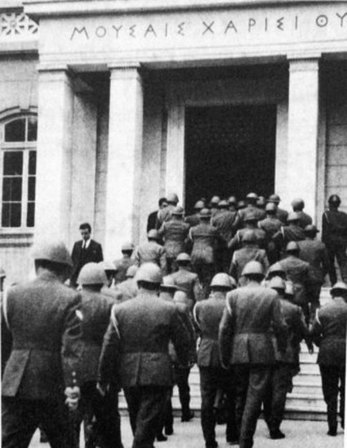 Policemen storming the Philosophical Faculty of the Aristotle University of Thessaloniki, during the military dictatorship of 1967-74. There can be seen both types of helmets in use.
So, if you are not into Greek militaria of the postwar period and you want a WW2 era untouched M34/39 or British/Commonwealth MkII, brown synthetic liners are to be avoided!